The University of Nevada (UNR) intramural practice fields near Mackay Stadium at Wolf Pack Park perform flawlessly now for almost 20 years.  Prior to the year 2000, the field would have been nearly unplayable during a rain storm with all the clay and mud.  The EPIC system was installed as a base to help the artificial field drainage perform better.  The sand base gives greater shock absorbancy, and a true ball roll with the laser level surface.  EPIC also contributes to helping cool the artificial field during the Summer.  We filmed athletes actively scrimmaging during the rain event labeled as a flood advisory for Washoe County on March 22nd, 2018, by the National Weather Service.  Consequently, much of the region received significant rainfall. 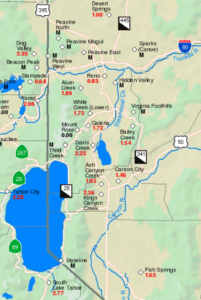 As you can see in the attached video, the UNR players still practice during the rain storm.  The field drainage is actively shedding excess storm water from underneath.  There is no surface pooling on the EPIC field.  The athletes are able to maintain footing and continue practice during the storm.  The drain also shows how clean the water is after being filtered through the sand profile.  There are three 6″ drains for the entire 4 acre complex.

Now notice the next video that shows a high school artificial field with conventional drainage after the same storm the same day.  The field is crowned so all the water sheds to the sidelines and pools at the surface.  This particular field is about the same age, however the conventional drainage has been replaced twice.  The most recent drain repairs were only a year ago, yet the field still does not perform and becomes a hazard for the students.

In conclusion, the EPIC field base clearly drains efficiently without clogging.  The sand base of the EPIC system is safer to help curtail injuries, and is a more playable field for athletic programs to consider.